Colin Carmichael
Carmichael has been a part of the Oklahoma State program since its inception in 1996. In 18 seasons as the Cowgirls' head coach, he has helped establish the program as one of the nation's elite. OSU is a perennial NCAA Tournament team, has been a fixture in the national rankings and has won nearly 70 percent of its games during Carmichael's tenure. He has been named the Big 12 Coach of the Year a record six times. 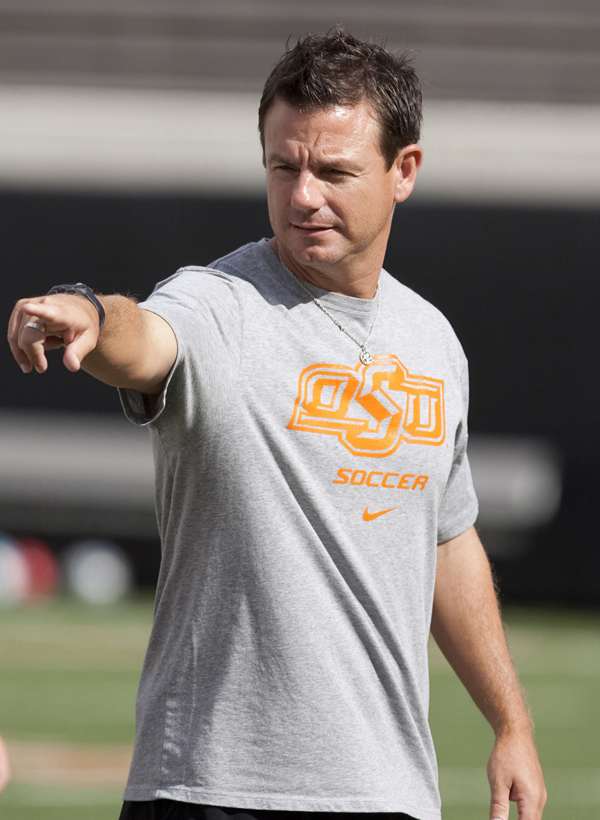 Justin Elkington
Elkington has spent 14 seasons as an assistant coach for the Cowgirls, helping lead the squad to five Big 12 titles and nine NCAA Tournament berths, which includes two Elite Eight appearances and a Sweet 16. He was named the 2011 NSCAA Women's College Assistant Coach of the Year for the Midwest Region after helping the Cowgirls to a record 22-2-2 season. In 2017 and 2019, Elkington was on an OSU staff honored as the United Soccer Coaches South Region Staff of the Year.
Elkington has tutored USWNT and Women's World Cup winner AD Franch as well as 2022 Big 12 Goalkeeper of the Year Jordan Nytes.
Prior to being named to the OSU staff, Elkington spent more than decade as the Director of Coaching with Hurricane Futball Club in Tulsa. He was named the 2008 Youth Girls Soccer Coach of the Year by the Oklahoma Soccer Association. A former professional soccer player, Elkington holds a United States Soccer Federation "A" License.

Hayden Hollinger
O'Hare joined the OSU coaching staff as a volunteer assistant in 2022.

Mallory Fowlkes
Fowlkes is the Cowgirl Soccer Strength & Conditioning Coach and is responsible for planning and implementing the annual training of the soccer team.

AD Franch
Franch was a three-time All-American and four-time All-Big 12 Conference First Team goalkeeper for the Cowgirls who racked up a school-record 38 shutouts during her OSU career. She's now a member of the U.S. Women's National Team, where she was part of the 2019 Women's World Cup champion squad, and plays professionally for the NWSL's Kansas City Current.